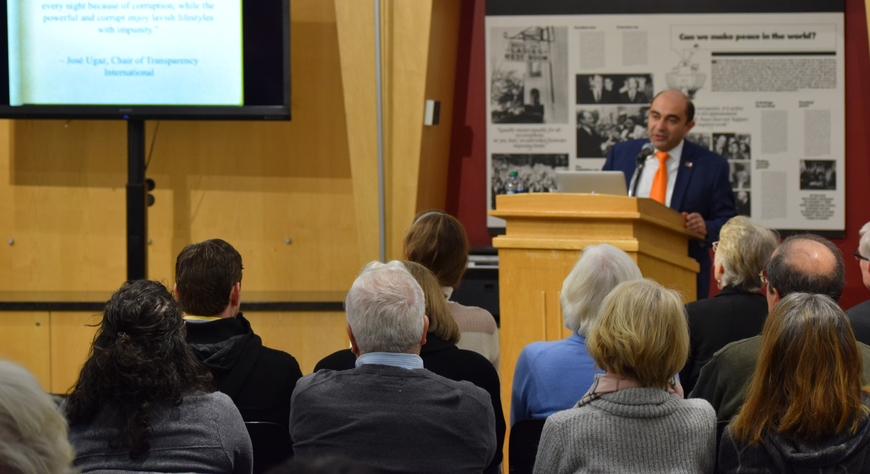 The Human Rights Program established the annual Scallen Lecture Series “Principled Voices” as a means of highlighting leaders and thinkers who distinguish themselves by carrying out their passion for human rights, cultural awareness, democratic principles, fairness, and dignity, often at great odds and great personal risk.  The series was established through a generous gift from Stephen and Chacke Scallen with a particular emphasis on exploring the erasure of cultures and understanding the role of corruption in human rights violations, including corruption of the government, business, churches, and other institutions.

The inaugural Scallen Lecture in 2017 featured Edmon Marukyan, member of the National Assembly of the Republic of Armenia and Chairman of the Council of Bright Armenia oppositional party. Mr. Marukyan set the tone for subsequent lecture events, speaking openly about his professional and personal challenges of fighting government corruption and advocating for human rights and a strengthened civil society within Armenia.

2021-22 - Darwin Franco and Dalia Souza, investigative journalists, ZonaDocs, "Reporting on disappearances in Mexico", following a special screening of Until We Find Them, an award winning documentary about the crisis of enforced disappearances which features Franco and Souza as protagonists

2019-20 - Kathleen Padulo, Environment Director of the Chiefs of Ontario and member of the Oneida Nation of the Thames, "Indigenous Peoples Need a Say on the Environment"

2017 - Edmon Marukyan, National Assembly of the Republic of Armenia, “Fighting corruption and advocating for human rights in Armenia”