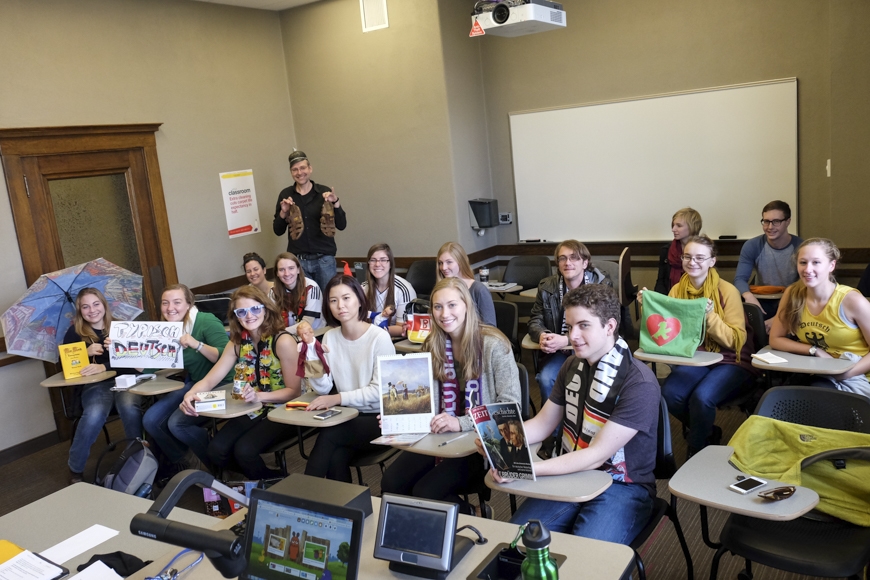 Scientists from the three major
German-speaking countries have
won dozens of Nobel Prizes in
physics, chemistry, literature, and
medicine.

Germany is the US's largest European trading partner and its fifth-largest
global partner.

Germany is consistently one of the top three countries in registering patents.

Learn how to create and pronounce
really long words!

Look! You can already speak
German!

German is one of the world’s major languages and is the most widely spoken mother tongue in the European Union after English. It's an official language of five European countries (Germany, Austria, Switzerland, Belgium, Luxembourg, and Liechtenstein). The lingua franca of Central and Eastern Europe, it is a commonly spoken language in many other areas and has growing numbers of learners worldwide, notably in Brazil, China, and India.

German is at the center

Germany is Europe’s strongest economy and plays a central role in current issues such as the environment, migration, and 21st-century globalization. A major force in international business, engineering, and science, it is a leader in innovation and creativity. In addition, German speakers have played a prominent role in literature, art, music, and philosophy. Learning German introduces you to the lands of ideas and diversity.

Where German can take you

Your possibilities are unlimited when you study German. “Made in” Germany,  Austria, or Switzerland are labels that signal the quality of products, design, and lifestyle. That reputation translates into business and career opportunities, intellectual achievements, and vibrant cultural exchanges. Learning German unlocks the door to many career paths.