Download and use the Networking worksheet to help guide your personal steps in evaluating and negotiating an offer.

Networking is by far the most effective way to uncover job/internship opportunities to pursue and, ultimately, land.

Why? It’s a pretty straightforward case of human nature at work.

Think of it this way: If you were an employer, how would you try to find someone to fill a key position? You would undoubtedly turn first to your own personal network of contacts, hoping that someone you already know and trust would either a) apply for the position themselves, or b) recommend someone good for the job.

Networking, then, is an essential way for you to build a community of support and connections for your job/internship search. It also helps you learn about a particular career field and how to pursue work in it.

Networking might sound daunting, even a little off-putting. But it doesn’t have to be. And once you start, you begin to realize something…

It can actually be fun.

“Networking” is a handout (in PDF format) that covers all the ins and outs of the networking process.

What Exactly Is Networking?

Networking is a fancy word for what is actually a very simple concept: talking to people and building relationships.

You can plan your networking activities out in advance if you’d like, or you can simply take advantage of networking opportunities as they come to you (or you to them). Either approach works well.

When you plan your networking activities, you often contact someone to find out if you have mutual interests. You then have a conversation about those interests.

When you meet new people by chance, on the other hand, and you end up discussing mutual interests or goals, you’re networking spontaneously.

You’ve likely been networking for years without even realizing it. Whenever you talk to someone about interests you both share, you’re networking. You’re also networking when you:

Informational interviewing is a special type of networking activity where you talk to—and ask questions of—someone working in a position or field you want to explore or pursue. Be sure to learn all about it, and to give it a try as part of your networking activities!

Ways to Get Help with Your Networking Activities

As a student—a CLA student as well as a U of M student—you have several resources at your disposal that will make your networking activities more fruitful and less intimidating. You can:

In addition to networking with people you already know, you can also network with complete strangers. This is actually very common in the world of working professionals, and there are many ways to find people to contact.

The easiest way to begin is to connect with someone you do know or someone that a friend, relative, or professor knows. Think about who is currently in your network, and how each of these people could support you in finding names for networking purposes. 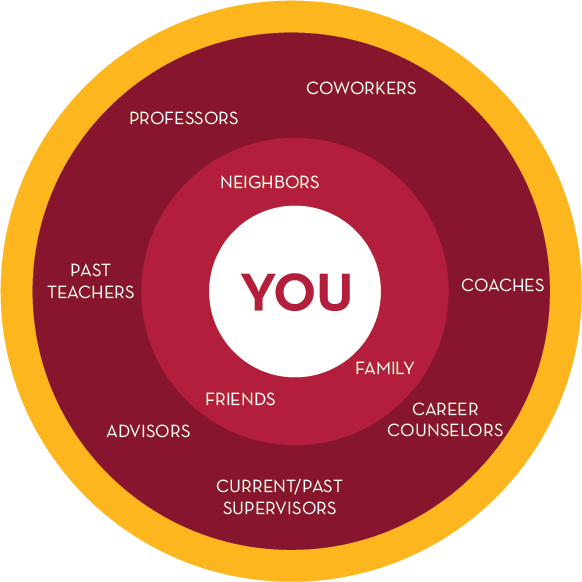 You can also identify people through:

You can make initial contact with people either by email or by phone, whichever you prefer. When you do, begin by telling them how you got their name. Then briefly describe why you’re contacting them and what you’d like to chat about.

Maybe, for example, you want to learn about their career, industry, or company. Or perhaps you’re looking for information about job opportunities in their field.

If you don’t reach the person right away, let them know how they can get back in touch with you, both by email and by phone (so that they can choose which method they’d like to use to respond).

Networking Gets Easier with Practice

Many people cringe at the thought of networking, thinking they have to show up in a space full of people they don’t know and begin to small talk. Others assume that networking means you have to be “schmoozing” or contrived in your conversations.

But true networking is actually genuine, mutually satisfying relationship building. And it gets easier with practice.

So if you’re shy, or if you’re uncomfortable contacting people you don’t know, that’s understandable. But keep this in mind: The worst response you’re likely to get is someone saying they’re too busy to talk. Or you may get no response at all, which still isn’t a negative.

Most of the time, though, you will find that people are remarkably willing to share information about their work, company, or profession. Especially since many of them have been in your shoes themselves, and they know they likely will be again.