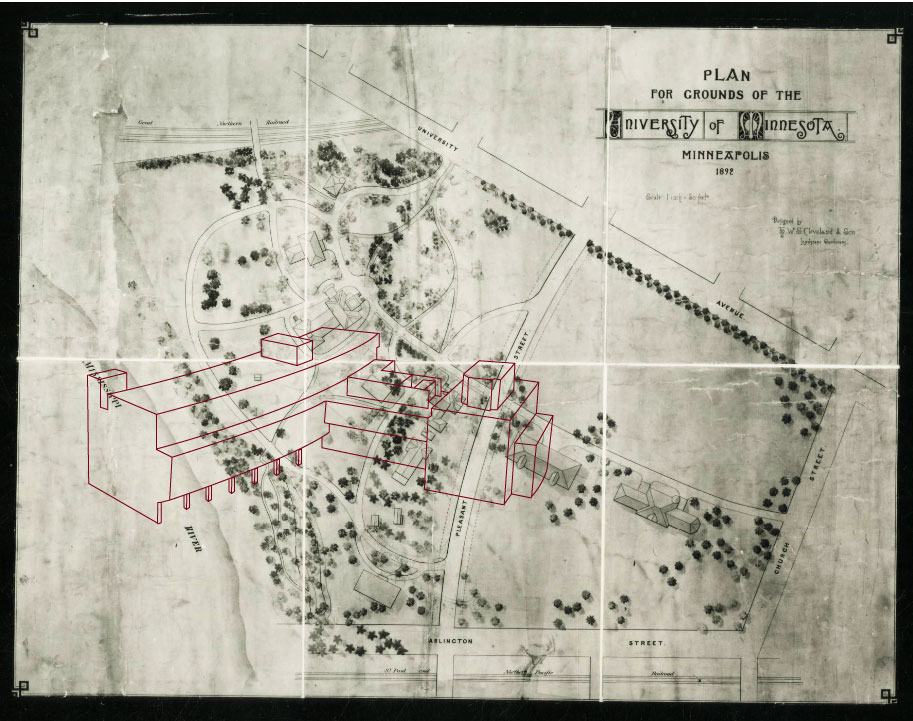 Map of the Knoll area from 1892. Source: University Libraries, UMedia.

Rethinking our history means recognizing the consequences and outcomes of past actions, intended or not. Rethinking our history—if it is to matter—requires taking responsibility for past injustices and current inequities. And rethinking our history is a part of the commitment outlined by Chair Jeff Simpson: “The Department of Psychology at the University of Minnesota is committed to identifying, addressing, and rectifying social and racial inequity and injustice…”

The history of psychology at the University of Minnesota includes both our history as an institution and the role we have played in the development of the discipline. Professor Moin Syed discussed current efforts to look at the history of the discipline. Regarding our history as an institution, we can begin by considering the land where the Department of Psychology has been located since its inception: the Knoll area of the University of Minnesota, as shown on the image above.

For hundreds of years, multiple bands of Dakota lived in the forested lands along the Mississippi and Minnesota rivers. In 1805, the Dakota agreed to allow the new US government to build a fort at the confluence of the Minnesota and Mississippi Rivers, the area named Bdote by the Dakota. Bdote is Dakota for, "a place of major social, cultural, and historical significance to all people inhabiting the region." By 1851, the influx of white settlers was growing and the Treaty of Traverse de Sioux ceded more land, leaving the Dakota only thin slips following the Minnesota River. The 1862 US-Dakota War concluded with the dispossession of all land in Minnesota from the Dakota, who were either killed or forcibly removed to other states or territories.

The first U of M Twin Cities campus building—Old Main—was built in 1856 less than 10 miles upriver from Bdote. Old Main was built three years before Minnesota became a state, five years after the Treaty of Traverse de Sioux, and six years before the 1862 conflict. The first psychology course was taught on the Knoll in 1890. The psychology department was formally recognized in 1917 and the department shared a building on the Knoll that had been erected in 1907. In 1970 a new building was built on the same land, dedicated to Richard M. Elliott, an Anglo-American, Dartmouth graduate, and the first full chair of the department. An interactive timeline of the history of buildings in the Knoll area can be seen at the U of M campus history.

In 1867, the U of M became a recipient of additional lands taken from Native people as part of the 1862 Morrill Act, a federal law signed by Abraham Lincoln that provided for such land-grants to support the growth of universities across the growing United States. The Dakota land ceded in the 1851 Treaty of Traverse de Sioux accounted for 1 of every 13 acres distributed by the Morrill Act.

In April 2020, the Chronicle of Higher Education interviewed Robert Lee, a researcher who has spearheaded much of the current accounting regarding the consequences of the dispossession of land from Native people and the beneficial financial outcomes from this history. Lee notes that 'land acknowledgments' are being made more often and discusses how a few Universities have gone beyond acknowledgment to implementing small but important steps toward reconciliation with Native people today.

The Department of Psychology at the University of Minnesota stands on Miní Sóta Makhódhe, the homelands of the Dakhóta Oyáte. By acknowledging this fact, it is our duty to explore what this means for our department moving forward. For starters, as stated in a land acknowledgment statement now circulating on campus, we know that “words are not enough. We must ensure that our institution provides support, resources, and programs that increase access to all aspects of higher education for our American Indian students, staff, faculty, and community members." We, as a department, have a responsibility to educate ourselves and act.