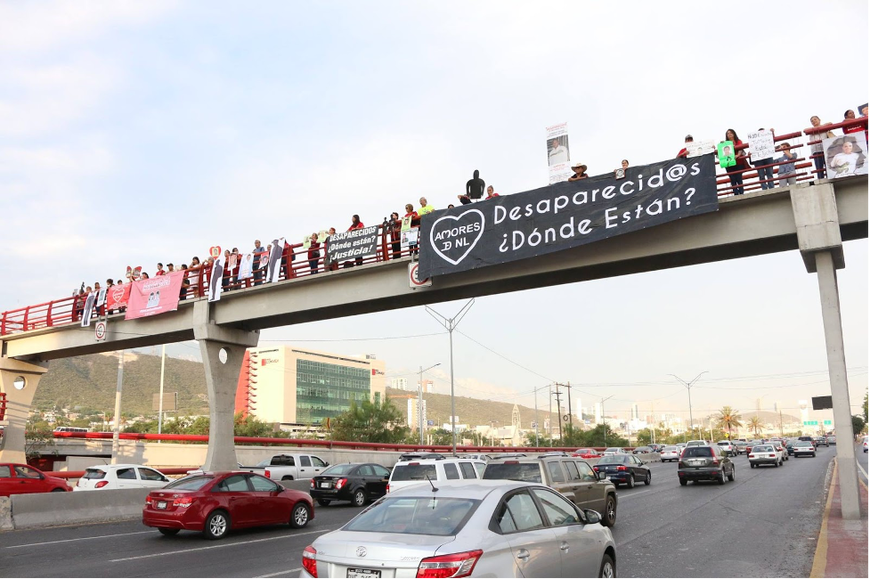 Nuevo León is a northeastern state in Mexico, bordering Zacatecas and San Luis Potosi to the south-west, Coahuila to the north-west and Tamaulipas to the East. It  also shares a short 9-mile border with Texas to the north. Nuevo León is made up of 51 municipalities with the capital, Monterrey, being the largest urban center in the state. The population, as of 2018, was 5,454,848, with a high concentration around the Monterrey metropolitan area. 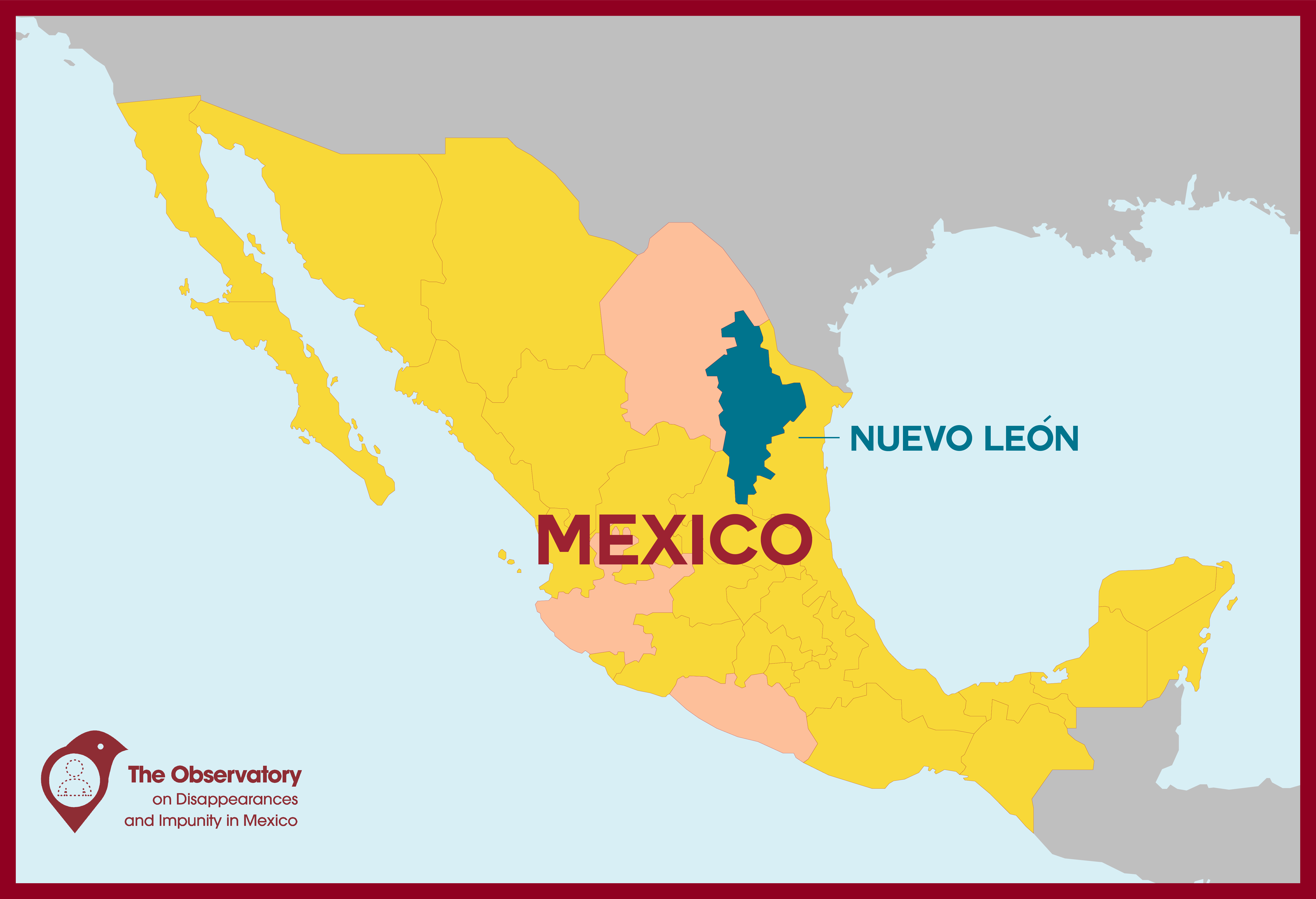 The most up-to-date data on enforced disappearances in Nuevo Leon can be found through Registro Nacional de Personas Desaparecidas y No Localizadas (RNPED), a national registry of disappeared and missing persons maintained by the Mexican federal government since 1964. For a case to be considered a disappearance, the individual reported missing must be missing for at least 48 hours. As of August 19, 2020, there were 4,374 people reported as missing or disappeared in Nuevo Leon.

(The infographics below represent the findings from the press database alone and do not include NGO database findings.)

The Observatory on Disappearances and Impunity in Mexico used findings from the NGO, Citizens in Support of Human Rights B.C. (CADHAC), in their 2017 report on Nuevo León. This report discussed the trends of disappearances in the state and dispelled many common myths surrounding disappearances. Unfortunately, many cases of disappearances go unreported and the researchers acknowledged limitations with this dataset. The Press Database provides a complementary source of public information about Nuevo León.

The Observatory’s NGO database is made up of 548 cases of people that disappeared between 2005-2015 in Nuevo León, with a few counted from nearby states like Coahuila or Tamualipas. The majority of the people represented in the data set were young men. Men, overall, made up 86.6% of the disappearance cases in the dataset. Of the men whose age was known (72% of men in the dataset), 59% of the victims are between the ages of 18 and 33. The oldest victim in the sample was 70 and the youngest was 3 years old.

Data from the press database reveal similar findings, suggesting that young men account for a large majority of the disappearances in the state. According to the information collected from press accounts in Nuevo León, in 7 of 10 (70%) cases the victim was male, while in 3 of 10 (28%) victims were women. Two victims were identified as transgender. Of victims whose age was reported (65% of victims in the dataset), 20% were between the ages of 10 and 17 and 30% were between the ages of 18 to 25.

The Observatory’s NGO database found that, when information was available concerning perpetrators, government agents were involved in 48% cases (this includes cases where state actors colluded with private actors). Such data dispelled the common myth that disappearances were only carried out by criminal organizations, without the involvement of state agents. The data further showed that, of those cases in which perpetrators were government agents, 49% were municipal agents, 25% were state agents and 26% were federal agents.

The press database findings support this pattern. When the press named one or more suspected perpetrators (59%, 96 cases), they reported that a state actor was involved in 36% of the cases: In 15% (14 cases) the perpetrator was exclusively a state actor and in 21% (20 cases) the state actor colluded with private criminal actors. Concerning responsible state actors, the press corroborated the Observatory’s NGO database --municipal agents the most frequently reported state actor (27 cases). Los Zetas were the most commonly reported private actor group-- implicated in 28 cases.

Another unfounded myth about disappearances suggested that victims in the state had left of their own volition and would reappear. The data collected from NGOs on disappearance in Nuevo León disproved this narrative because 75.91% of the cases remained unresolved. Only 12.41% of disappeared persons were found alive and 11.68% were found dead. The press reports align with these findings. The victim remains disappeared in 61% of cases (if the press did not report an outcome, the victim was assumed to remain missing). In 21% of cases the victim was found deceased and only 18% of victims were found alive.

A downloadable PDF of these infographics is available here.

Major corporations located in this state include Bimbo, which produces baked goods; Banorte, one of the four largest banks in Mexico, and FEMSA, which produces, markets and distributes Coca-Cola products, in addition to engaging in other retail ventures. As of February 2019, there were 67,562 businesses officially registered through the Mexican Social Security Institute (IMSS) in this state. Despite its industrial reputation, Nuevo León also contains a sizable agricultural business sector and produces 8.5% of the country's agro-industrial output, ranking third among all Mexican states.

Nuevo León’s GDP is around 1.8 trillion pesos or 93 billion dollars per year, as of 2018. It contributes about 7.5% to the country’s GDP while only making up 4.4% of the nation’s population. The average daily income per capita is approximately $21.31 dollars per day, which is 1.1 times greater than the national average.

Overall, Nuevo León has a high quality of life compared to other states in Mexico;  it has the third-highest Human Development Index (HDI) score out of the 32 states in the country. This assessment is based on indicators such as Gross Domestic Product (GDP), average income, the literacy rate, and access to education. Literacy levels are high; 97.4% of people in Nuevo León over age 15 are literate. Additionally, the average number of years of schooling for an individual 15 years or older is 10.2 years, which is the second highest in the entire country. It is also home to various highly regarded universities including the Autonomous University of Nuevo León, the University of Monterrey and the Monterrey Institute of Technology and Higher Education.

The government of Nuevo León, along with the Mexican federal government, shapes policies that are meant to respond to the increased presence of organized crime in the area. A watershed moment in the management and confrontation of drug cartels occurred in 2006, when the federal government issued a declaration of war against the drug cartels. This declaration and its accompanying policies led to a rise in the militarization of security forces across the country.

Overall violence in Nuevo León peaked in 2011. At this time, many residents had low levels of trust in the municipal police, given a rise in public executions, gun-fights, decapitations and the dismembering of corpses. In response to the dire situation and in an attempt to reduce these abuses, Rodrigo Medina’s administration (2009-2015), shifted away from the previous administration’s focus on combating organized crime and prioritized institutional changes. Notably, however, heightened security presence remained intact.

The shift towards institutional reform enacted under Governor Medina was largely due to an organization called Ciudadanos en Apoyo a los Derechos Humanos A. C. (CADHAC), a human rights-focused NGO. Under the guidance of one of CADHAC’s groups, Agrupación de Mujeres Organizadas por los Ejecutados, Secuestrados y Desaparecidos de Nuevo León (AMORES DNL), the organization lobbied, increased public awareness and called for policy changes in how the administration handled the “war on drugs''.

Thanks to the efforts of CADHAC, the state’s government developed channels to legally address human rights abuses. An avenue of dialogue was established between the families of the disappeared and the office of the state Attorney General (Procuraduría de Justicia del Estado). The government created a specialized group to search for the disappeared ( Grupo Especializado de Búsqueda Inmediata de personas desaparecidas or GEBI). Perhaps most significantly, CADHAC and AMORES succeeded in pushing the legislature to adopt a law to establish legal absence (Ley de Declaración de Ausencia), which allowed families of the disappeared to access social benefits and obtain legal proof of their relative’s disappearance.

Governor Jaime Rodriguez Calderon (2015-present) has ordered increased military presence in the seven municipalities that make up the Monterrey metropolitan area. The intensified security measures have coincided with a period of increased violence in the form of homicides, kidnappings and disappearances.

The most prominent drug cartels in this region are the Sinaloa Cartel, the Gulf Cartel and Los Zetas. Cartels are attracted to the area due to its proximity to the U.S. border. Additionally, a robust economy in the state, fueled by manufacturing and other industries, provides public demand for their products and opportunities for laundering illicit funds. Monterrey, with its high level of economic development activity, is an easy target for cartels to access streams of licit and illicit revenue, as well as means of production and trafficking. The escalation of criminal cartels in this area and their inroads in law enforcement has had severe negative consequences in the safety, stability and politics of the state (Observatory 2017).

El Norte is a regional paper that caters to an audience in the state of Nuevo León. It is one of the most widely read daily newspapers in Mexico, with a print circulation of 135,000 and 400 employees (interview, Torres, 2017). Founded in 1938, El Norte is part of the Reforma Group (Grupo Reforma), a large publisher in Latin America, which produces ten daily papers throughout Mexico. While most regional newspapers are deferential toward the ruling political parties, especially the Institutional Revolutionary Party, (PRI), El Norte has been considered relatively independent and more conservative leaning than its counterparts.  According to a 2012 study by the MEPI Foundation, El Norte was one of only two daily papers in Mexico “that provided context to the violence in the country, identified the victims and did follow-ups” (ProPublica, 2012).”

Frey and Cuellar (2020) found that coverage of disappearances in El Norte was conditioned by the relative status of the victim, security concerns for the paper’s staff, and the level of interest human rights groups and the victims’ families galvanized through the dissemination of information and humanization of a particular victim. It was unusual for a disappearance case to be featured in more than one article published by El Norte, with exceptions made for those cases deemed to be of high profile.

Some reporters at El Norte took the initiative to investigate cases and to portray the victims and their families in a more holistic, dignified manner. The reporters most likely to be permitted to do this have seniority at the paper, and have the relative freedom to choose which stories they pursue and publish.

Another news source that reaches a large audience in Nuevo Leon is La Jornada, a national daily newspaper. In terms of political leanings, La Jornada favors progressive and left wing perspectives and shows a willingness to critique the government. It was founded in 1984 and remains an independent source of news for subscribers all over the country, including in Nuevo León. This paper claims to offer its readers “veracidad, objetividad, claridad y oportunidad en sus noticias y así contribuye al desarrollo de una sociedad plural y con justicia social para todos” (veracity, objectivity, clarity, and opportunity in their news and to contribute to the development of a plural and just society for all). A report from the University of Murcia characterizes La Jornada as a “progressive-alternative medium of communication”. Its website ranks number two among the most popular Mexican news sites and number 83 out of all news sites in Latin America.

El Proceso, a national news magazine with a presence online and in print, has a significant following in Nuevo León. The magazine reports on politics, justice, and current events across the country. It tends towards progressive ideology. Since its founding in 1976, this news outlet has gained a loyal audience.