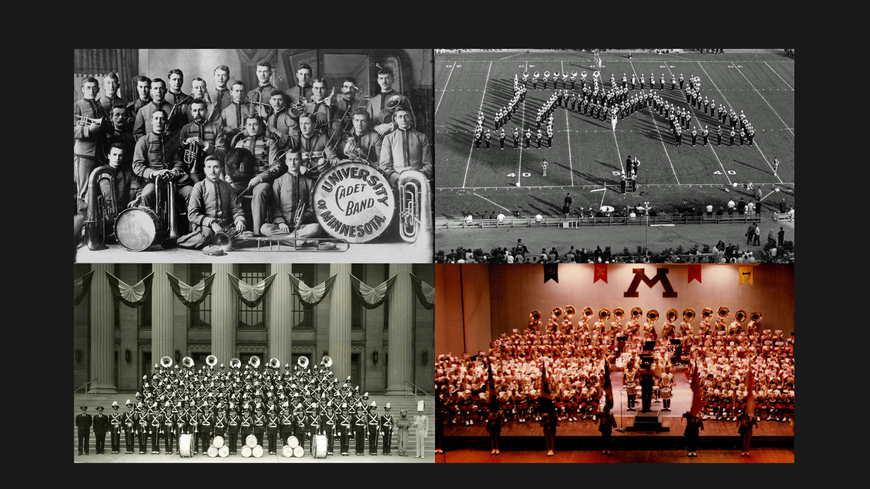 The marching band performs at all Golden Gopher home football games at the Huntington Bank Stadium in Minneapolis. The band holds its annual Indoor Concert in Northrop and performs in the annual U of M Homecoming Parade down University Avenue. All marching band members are required to register for MUS 3480—the official marching band class in the School of Music.

The University of Minnesota Marching Band was founded in 1892 as the 29-member University Cadet Band. In 1910, the band presented the first formations and halftime "show" during the Gopher football season. Included in the early formations was the first "Block M." The current Block M is now a symbol of the University. The band has gone through many changes over the years.

The first significant change was merging with the local army band to form the first regiment of Minnesota Band in 1918. A second regiment of Minnesota Band also existed briefly in 1918, until the regiment was decommissioned later that year. Following the war effort, all students in either band were invited back to a separate University Band, which had dropped the word "cadet" from its title. Another change from the band's early beginning was the slow but continual introduction of women into the band program. Women first entered the concert band in 1934.

During the WWII years (1943–1946), women could be found "filling in" in the marching band, much like in other activities, such as manufacturing and baseball. In 1950, a new "Girls' Band" was formed at the university, which later was called the "Women's Division" of the marching band and remained for a number of years. Women were finally added as full members to the University of Minnesota Football Marching Band in 1972.

Since 1892, the band has been led by 18 directors. The band has also had 64 drum majors. These band members take great pride in their part in leading one of the finest marching bands in the nation.