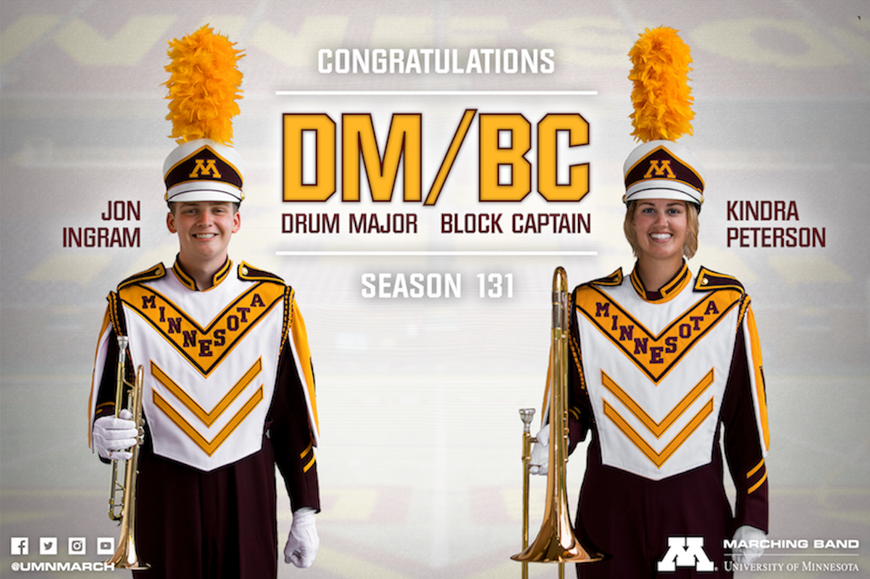 Jon Ingram grew up in Victoria, Minnesota and graduated from Chanhassen High School in 2019. Jon was very involved in the music program all throughout high school, participating in marching band, concert band, jazz band, pit orchestra, and pep bands for various sports. He served as one of the three drum majors for the CNHS Marching Band during his senior year. In addition to this, Jon participated in the choir program and took classes to further his music theory knowledge and leadership skills. It was participating in these various ensembles where Jon found his love for music, leadership, and teaching.

Currently in his senior year at the University of Minnesota, Jon is majoring in Biology within the College of Biological Sciences and minoring in Music. Once graduated, Jon plans on exploring careers in the medical field and plans on staying close to the Twin Cities. In his free time, he enjoys backpacking, reading, bouldering, and spending time with friends and family.

Before becoming Drum Major for the Pride of Minnesota, Jon was a member of the trumpet section for three years, serving on the trumpet leadership team during the 2021 season. During his time as a trumpet leader, he further developed his leadership and teaching skills, and hopes to apply this experience to the Drum Major position. As Drum Major, Jon hopes to work together with the block captain, Kindra Peterson, to strengthen the relationship between sections, further connect with groups that the band closely collaborates with, and support every individual within the band as best as he can.

The block captain works closely with the band's faculty, staff, and leadership team to serve the needs of all band members while continuing to serve as a regular member of the ensemble.

The band has had 15 block captains, each with their own spin on the position and contributions to the organization.

Kindra Peterson grew up in Underwood, Minnesota and graduated high school there in 2020. While in high school, Kindra was a three-sport athlete who also participated in the arts such as band, choir, pep band, various small ensembles, and community theater. Additionally, she represented her community at the American Legion Auxiliary Girls Nation program and led her community service organization for several years. These activities created the foundation of her love for music and serving her community.

Today, Kindra is a rising junior at the University of Minnesota double majoring in Political Science and Russian with a minor in Communications. She is hoping to one day use this unusual combination of studies to pursue a career in national security and counterterrorism. In the meantime, she is a proud member of the trombone section, where this year she will be taking on duties as a section leader in addition to Block Captain. She is also a member of the university’s Athletic Bands, where she enjoys watching hockey and basketball. In her free time, she loves to bake and decorate cakes, play flute (as trombone is actually her secondary instrument), and is currently reading Game of Thrones.

With a year of UMMB experience under her belt, Kindra is honored to be a part of the team to lead the band in Season 131. Along with Drum Major Jon Ingram, she can’t wait to take steps to strengthen the band’s performance, formulate relationships across sections, and prepare performances for the university community and beyond.